DYING FETUS will be heading to Europe this summer for a tour in support of their forthcoming release Reign Supreme.

The tour kicks off June 16th in Copenhagen, Denmark with an appearance at the “Copenhell Festival“. After a quick return back to the states to finish up the “18 Nights of Blood Tour” with Six Feet Under and label mates Revocation, Dying Fetus will return to Europe on June 29th to perform at the “With Full Force” festival in Germany. The band will remain on tour in Europe for a string of headlining dates in Spain and festival appearances, capping off the tour in Gävle, Sweden at the “Getaway Rock Fest” on July 6th. 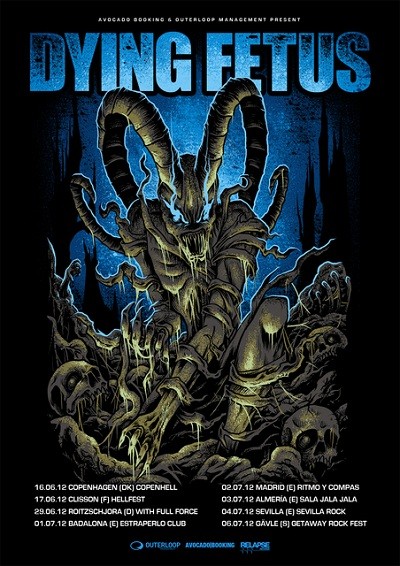 Dying Fetus have confirmed a June 25 release date (in Europe) for their new album entitled Reign Supreme. The album will feature nine tracks and is a “return to roots” with production focused slightly more on slam than in the band’s last few works. Thematically, the album is set to be a good old-fashioned piece of social and political commentary in the style of Dying Fetus as we have come to know.

Check out an album teaser HERE.

The first video in a series of in-studio videos taken during the recording process of Reign Supreme is available for viewing HERE. This video focuses on the drum tracking.

Check out an exclusive lyric video for the first new song from Reign Supreme entitled “Subjected to a Beating” HERE.

Heaven Shall Burn, Hypocrisy, Dying Fetus, Bleed From Within – Koncertbeszámoló