French Heavy/Thrash metallers E-FORCE will release their third album, “The Curse…” on 11th April via Mausoleum Records. E-FORCE have been labelled monsters of Thrash, and they are, but Eric Forrest’s (ex Voivod) wide array of musical influences, interesting lyrics and vocal capabilities set them apart from the pack and ensure that this band is very original. 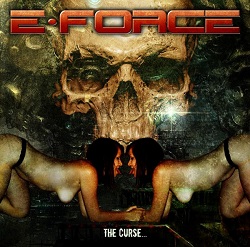 Besides Eric the current E-FORCE line-up features the return of KROF on drums; a member of the 2005 European touring line-up, and introduces XAV on guitar. “The Curse…“, is a concept album that is based on a powerful collection of songs describing the power and temptation of, and obsession with the female race.

Special guests on the album: 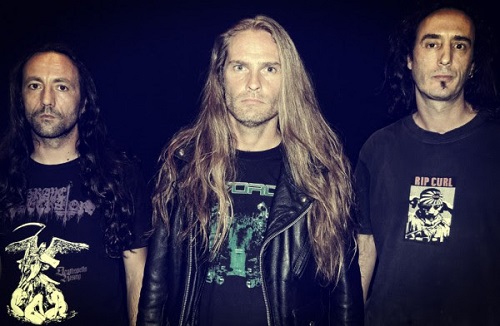 E-FORCE was formed in Montreal, Canada in 2001 by vocalist/bassist, Eric Forrest, upon his departure from the legendary Canadian cyber metallers Voivod. In all Eric spent seven years fronting Voivod. Joining them in early 1994, following the departure of vocalist Denis “Snake” Bélanger, he appeared on two studio masterpieces, Negatron and Phobos; on the live album, Voivod Lives, as well as on the remix compilation: Kronik. Upon his departure from Voivod, Forrest chose to use his nickname, E-FORCE, as the name for his new band.

E-FORCE released their debut album Evil Forces (recorded by Pierre Remillard known for his work with Cryptopsy, Gorguts, etc.), to widespread critical acclaim in October 2003. Following the release of Evil Forces, Forrest relocated to Toulouse in France which obviously resulted in a line-up change. In February of 2008, E-FORCE finally released their follow-up album, Modified Poison. The album further expanded the sound and intensity of the band, impressing both fans and critics alike.

Throughout their 10-year history E-FORCE has released only two albums, albeit prominent ones, but nevertheless managed to perform in 18 different countries since the band’s inception, appearing at some of the most prominent festivals of the musical genre, such as: the Six Pack Weekend Festival in Cleveland, Ohio in June 2004 (with, among others Doro, Metal Church and Dismember), and twice at the Raismes Festival in France, in2004 (with Angra, Rage, Primal Fear) and 2008. In the winter of 2005, they invaded a dozen countries across Europe, on a successful tour withCarpathian Forest, Tsjuder, and Wykked Witch, playing more festivals the following years, including Brutal Assault (Czech Republic) 2007, Ost Mountainfest (Romania) 2011 and the Metalfest Open Air (Hungary) 2011.