SVART RECORDS sets May 2nd as the release date for Spiralo, the second full-length album by the Finnish kosmische Musik band E-MUSIKGRUPPE LUX OHR. A voyage beyond earthly certainties, into the secrets of time and space, Spiralo is a full-blown cosmic adventure in six parts. It began as an improvised live set that the band played at concerts during the late 2011 and early 2012. Later, the band decided to recreate the set in the studio and release it as a follow-up to their highly acclaimed debut album, Kometenbahn.

With Spiralo, the four space cadets of E-MUSIKGRUPPE LUX OHR (Pertti Grönholm, Jaakko Penttinen, Kimi Kärki, and Ismo Virta) continue to permeate through the cosmic haze, to scout such corners of space which have remained unexplored for almost 40 years. The sounds and textures of E-MUSIKGRUPPE LUX OHR are spiraling from the worlds which were explored by the German kosmische Musik pioneers in the 1970s and early 1980s. Sometimes, the explorers find themselves in the middle of dark and still soundscapes; sometimes, they hitch-hike all over cosmos by riding on spellbinding melodies and gripping pulses. 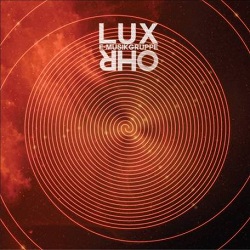 The members of E-MUSIKGRUPPE LUX OHR have been active in various underground music scenes for a long time. Kimi Kärki is the founder and guitarist of doom metal bands Reverend Bizarre and Lord Vicar and psychedelic progressive band Orne. Ismo Virta leads Kosmos, a folk/prog band, and makes up a dark ambient duo Dystopia with Pertti Grönholm. Besides Dystopia, Grönholm is known for his electronic music and ambient solo works and projects such as Corporate 09. Jaakko Penttinen has a background in various punk bands such as Forca Macabra, but nowadays is better known for his ambient and space music projects such as Galactic Travellers. Samples ofSpiralo can be heard HERE.