EDEN’S CURSE are disappointed to announce the departure of Pete Newdeck from the band. Pete has been the drummer of the group since it’s formation in 2006 and has been a key member of the writing team during those eight years together. However he announced to the band just before Christmas that it was his intention to leave the group due to personal and family commitments as well as wishing to concentrate on Tainted Nation, whom he fronts as their vocalist, and his activities as the drummer for UK AOR act Newman.

Bassist and founding member Paul Logue comments “We are extremely disappointed to lose such a talent as Pete, but fully understand his reasons for moving on. We are very proud of what he has built with Tainted Nation and in particular for stepping out from behind the kit with such consummate ease. Without question we will all remain great friends with Pete and wish him and Tainted Nation nothing but the greatest of success for the future ahead“. 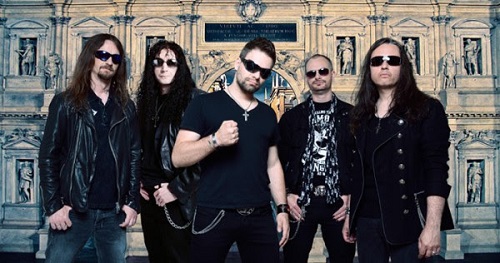 Pete himself adds “This was a difficult decision to make, yet one that was made easier due to the compassion, understanding and support I was shown by the other guys in Eden’s Curse. It’s basically a case of having an array of commitments, some personal and some musical, that I felt I had to prioritise. I am sure the band will not see this as a setback and I wish them the continued success they deserve and to build on the acclaimed album we just released“.

The bond between both parties is further demonstrated by Eden’s Curse announcing that Tainted Nation will support them on several of their up and coming shows on their “Symphony Of Sin UK Tour” in May.

It is with great pleasure that Eden’s Curse announces that Scotsman John Clelland (Code Of Silence) is the bands new Drummer.

Hailing from Edinburgh, John has been working with bassist Paul Logue on several album productions over the past few years, most notably the “Dark Skies Over Babylon” album by Code Of Silence, and was on obvious choice it seems. “John and I have worked together for a few years on various musical projects, especially the Code Of Silence album that I wrote and produced. I always found him a pleasure to work with. He is extremely methodical and approaches things in a very studious and professional manner. You always know when working with John that you will get absolute quality back in abundance and not just your run of the mill typical drum parts either – they are typically well thought out, crafted and executed with great precision. He is a great player and an even better person and when Pete told me that he was leaving there was only one choice in my mind. It was just a case of convincing the rest of the band what I already knew and that John would fit the ethos on what Eden’s Curse stands for today” stated Paul.

John himself beamed “I’m honoured and delighted to be the new drummer in Eden’s Curse and to be part of the team. I’m really excited about touring the UK with the guys in May and working on new EC material in the future. I’ve been told how great the Eden’s Curse fans are and I’m looking forward to meeting them all. I think you will be impressed by the set of songs that the guys have selected for the bands first headline tour. I’m looking forward to forming an all Scottish solid rhythm section“!

An introductory video to John Clelland can be viewed below: http://youtu.be/dmzMDdifdK8

Eden’s Curse will be undertaking their first headline tour on the UK leg of the “Symphony Of Sin Tour” which will hit Britain this coming May.

The dates are as follows :

More information and ticket links can be found at www.edenscurse.com/uktour