On April 18th EDGUY’s 10th studio album “SPACE POLICE – Defenders Of The Crown” will hit the stores worldwide, followed by a world tour starting in September.

The band have just released the cover artwork for this upcoming album. 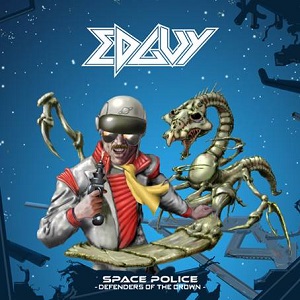 Last Saturday several journalists had the chance to listen to an unmastered version of the new album and the reaction was overwhelming:

“Constistent and yet consistently different – Edguy defend the crown in German Metal with the greatest of ease… and as always: tongue in cheek”

The tour management has just confirmed the kick off date for the European “Space Police Tour“ on September 19th. In Hamburg, Germany EDGUY will headline the Hamburg Metal Dayz.

As said the show will mark the kick off to the band‘s first full-fledged headlining European tour after the successful Age Of The Joker Tour 2011.

The Metal Dayz will be the band‘s only festival show in Germany, further tour dates will be announced soon.