ELDIMNER’s Inom förloppet av ett liv, its debut full length album, has had the digital version of the album pushed back to October 12th due to technical issues.  The physical version, available only through the band, will still be shipped for the original September 28threlease date.  The band’s first two singles from the album, “Livsflykt” and “Från mitt hjärta (feat. Axel Widén of ZOMBIEKRIG)” can be heard at http://soundcloud.com/pivotalrockordings/ 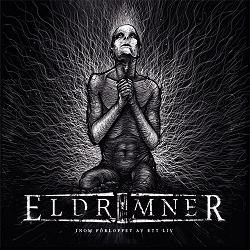 ELDRIMNER is a Gothenburg, Sweden based progressive extreme metal act featuring MARIONETTE vocalist Alexander Andersson.  Lyrically, Inom förloppet av ett liv tells the life story of a man who discovers a darker side of himself which in turn grows into a disease infecting his thoughts and actions.  Performed entirely in Swedish, this is a story in which your darkest thoughts surface and sing out in pure lamentation.  Expect nothing less than the most bombastic, rhythmically eclectic and stylistically transcendent metal to ever come from Sweden.

ELDRIMNER recorded drums at Top Floor Studios in Gothenburg and guitars, bass, vocals and mixing took place at N3 with THE CROWN guitarist Marko Tervonen.  The album was also mastered by Tervonen and Dragan Tanaskovic (DARK TRANQUILLITY,DIMENSION ZERO, IN FLAMES) and features a guest vocal appearance from ZOMBIEKRIG vocalist Axel Widén who also created the artwork for the album and accompanying novel which will be unveiled on a weekly basis during the run up to the release.

Founded in 2006, ELDRIMNER immediately played shows regularly with other groups in the tight-knit Gothenburg black metal scene.  Over the following years, the band’s original black metal sound evolved and matured, taking inspiration from groups as varied as MESHUGGAH but with focus kept on their new branch of black metal.  In 2009, ELDRIMNER released an EP entitled I mitt jag which was followed by an appearance at Metal Town, Gothenburg’s largest metal festival.