The live DVD is something long requested by fans of Elias’ solo works and we are proud to be able to introduce this added bonus which allows guitar fanatics worldwide the chance to experience Elias formidable technique live and up close.

Some 9 years after original release “Taking The Lead” is still regarded as one as one of the best debuts of instrumental rock/metal guitar to have emerged in the 21st century from a then unknown guitarist, and Elias has built a reputation that has seen him advance into the upper tier of hard rock shredders founded on the solid foundations of this debut solo release. 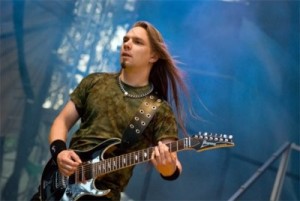 Fans of highly charged guitar instrumentals will find much to enjoy within “Taking The Lead” thanks to its heavy dose of melody intertwined with the thrilling guitar flash and virtuosity for which Elias is known. The quality of material saw the album upon original release end up with a top 10 rank in guitar9.com’s 2003 end of year best sellers chart. The album even attracted the attention of one Steve Vai who had gotten hold of the album and subsequently sent Elias some positive feedback on the release.

The new dual CD+DVD version of “Taking The Lead” hits the streets on 19th August 2011.