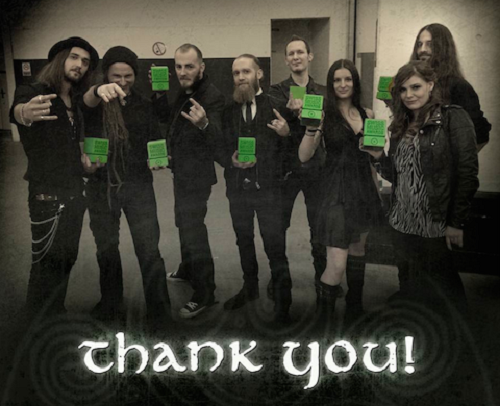 On Friday, March 7th 2014, the Swiss folk metal leaders ELUVEITIE have been awarded one of Switzerland’s most prestigious recognitions in music: a Swiss Music Award in the category “Best Live Act National”. The decision was made by a highly competitive fan voting, and marks the very first time ever for a metal band to receive this honour. Watch Eluveitie accept their award at the “Hallenstadion” stadium in Zurich, during a massive 2-hour show on live television: http://www.joiz.ch/show/swissmusicawards/joiz-pre-show-swiss-music-awards#!video=sma-6-tom-odell-kuert-den-best-live-act-national

Commented the band: “Now that we have recovered from Friday night’s events (although our minds are still blown), we would like to say a few words:

Winning a Swiss Music Award for “Best Live Act National” is certainly one of the highlights of our career, and an immense honour. However, it is not just our honour, but yours to share with us: this award goes out to all of you! The stage at the stadium in Zurich last night was as much yours as it was ours. It is also not simply a recognition of our most recent activities, but the result of many years of hard work and amazing times.

We want and have to thank each and every one of the amazing people who have worked with us and supported us in any way during the last 12 years. There are many, and listing them here would exceed the scope of this message. Please take the time to visit our website, where we have tried our best at the futile attempt to list all their names: http://eluveitie.ch/swiss-music-awards-2014/

But most of all we want and have to thank all of our amazing fans all over the globe, who stood with us, supported us and came to our shows. Our die-hard fans, our incredible fan clubs (in particular ELUVEITIE Brasil, Poland, and France), all the members of our official forum and everybody who voted for ELUVEITIE, joining forces with us to show the whole music world how strong metal really is! This award is your award! You all rock!

Even more motivated we now return to Tommy Vetterli’s New Sound Studio, where recordings for our new album have started last week already. ELUVEITIE 2014 is going to be a big one!”