On February 28, 2014 a long expected reissue of Annihilation, second demo by death metal murderers from EMBRIONAL, is going to be released. The piece presents the way the band chose with their next album. Six brutal hits from the demo remained as they were. Music without unnecessary processing, mixing or anything that could destroy the original aggression of the songs.

In addition, the album contains extra live content from Rude Boy Club in Bielsko-Biala on Feb 7 2013. It was professionally recorded and engineered, which allows for vivid experience of that event. Over 50 minutes of death metal for old school fans.

The whole is wrapped in awesome graphics by Mariusz Krajewski and old school cover designed by Perversor. 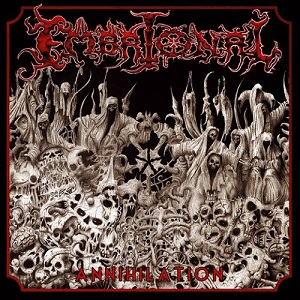 Two songs from the album are available:
Murder and Cruelty
Dismal Symbol (live)