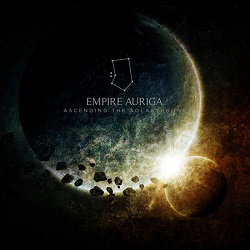 With EMPIRE AURIGA‘s current lineup consisting of Boethius (“communications”), 90000065B (“transmissions”), and Gestalt (“static”), a communique from the band reads: “Ascending the Solar Throne hovers, wavering, in a state of paradoxical scope and size, simultaneously collapsing and shrinking back into itself and expanding outward like vapors finding escape through cracks in a facade. A hallucination induced by internalized elements of black metal, doom, psychedelic, shoegaze, industrial, and contemporary ambient, facilitated by DSP environments, immersed deep in catatonic trance like an oil-puddle rainbow, EMPIRE AURIGA seeks the machine in the ghost.”