The following is the fourth of eight installments where bassist/vocalist/lyricist Grutle Kjellson and rhythm guitarist/songwriter/lyricist Ivar Bjørnson of the Norwegian progressive extreme metal band ENSLAVED offer insight on the tracks to their twelfth studio album, „”RIITIIR““, due out in Europe on September 28th.

Kjellson on “RIITIIR” Track #4, “Roots Of The Mountain”:
“One of our greatest friends in The States tends to use the term ‘Epic as f**k’ to describe something grandiose and this is the closest I get to describe this song. Yes, it sounds pompous, but I´ve always said that our goal is to make our own favorite music, so why be sober or moderate in the descriptions? I remember that Ivar came to the rehearsal place and put on the demo for me and Cato [Bekkevold, drummer], and we got totally blown away! In the middle of the second listening, Herbrand [Larsen, keyboards & clean vocals] appeared, looking genuinely confused, and I thought: This is a good sign!!! He is usually the Rock-structure alibi in the band, so to see that he was a bit worried really satisfied the rest of us. Of course, he also ended up loving the song after digging into the matter and started working on the arrangements. This song has everything one can ask for in an ENSLAVED song: aggressive and old-school metal riffs, a pompous chorus, and progressive passages. It also includes my favorite guitar solo on the album and shows [lead guitarist] Ice [Dale]´s talent for transforming almost FM-rock solos into a monstrous extreme metal inferno!! I love it! I can even find inspiration from our good old countryman Ronni LeTekrø from TNT here – one of the bands me and Ice tend to listen to on our days-off on the tour bus if we have been drinking one or two barrels too much. The lyrics are, again, inspired by different mythologies/philosophical systems around the world with mutual ways of approaching the search for the ultimate answers. When you seek truths and answers, you rarely find them where they would logically appear. It is sometimes important to go with the flow and accept the reality as-is, and thus find the truths in the end. The roots of the mountain will appear for you if you use the eyes of the eagle in the sky…well, maybe it will.”

Bjørnson on “Roots Of The Mountain”:
“This is probably the most strange and diversified songwriting I’ve done in terms of the surrounding circumstances. The main themes came crashing down on me at the most impossible times for me, beginning with being in transit for ENSLAVED concerts in late 2011 with no instruments available and utilizing rather primitive programming on a Smartphone. I had no choice but to put the ideas down somehow (I’ll see if I can include a sample of the horrible MIDI-sounds on the behind-the-scenes DVD accompanying the release), ending with writing in the home studio in the hours before the most important night in my life [when Ivar’s first child was born. –Ed.]. Dramatic stuff that resulted in dramatic music! At some point in the song, I can hear myself drawing influence from newer King Crimson and then Von within the same minute – that’s got to be slightly unusual. The ending turned out quite epic. Co-producer Iver [Sandøy] played a vital role in shaping the final production for that part of the song; I will always be thankful for his introduction of both the Taurus bass pedals and SH-1 mono-synth-line on this track! Finally, I love how Grutle’s mythological lyrics for this song play out in a very filmic language – particularly when the singers do their ‘duet’ on the end part. It turns out you can sing about eagles in the sky without any traces of cheesiness, as long as you actually know what you are talking about – which no doubt Grutle does.”
Read past commentaries on “Thoughts Like Hammers,” “Death In The Eyes Of Dawn,” and “Veilburner” on the ENSLAVED Facebook page. 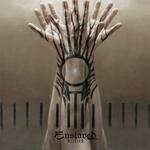 Listen to “Veilburner” here and “Thoughts Like Hammers” on NPR.org.
Glimpse into Truls Espedal’s creation process for “RIITIIR”’s artwork on the Nuclear Blast YouTube channel.