Belgium-based black metal entity ENTHRONED and Italian black/rock/doom metal majesty FORGOTTEN TOMB are due to kick off a European tour on the 28th of November (Wednesday) at Le Korigan in Luynes/Aix (France).

Both bands are touring in support of their latest full-length albums: Obsidium (by Enthroned) released in March via Agonia Records and quoted as one the best 2012 metal releases by PopMatters as well as …And Don’t Deliver Us From Evil… (by Forgotten Tomb) that is due to be released a month before the initial tour date.

The eleven-date journey will also include Singapore’s black/death metal outfit Impiety as well as Spanish Black/Death thrashers Noctem. The entire event is organized by The Flaming Arts Agency (www.theflamingarts.eu).

See ENTHRONED and FORGOTTEN TOMB on tour at the following shows: 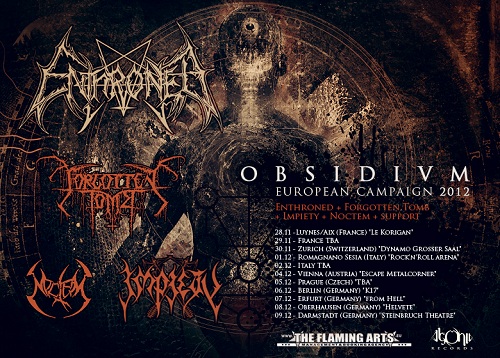 ENTHRONED‘s Obsidium is available now in 4 different formats at:  http://agoniarecords.com/index.php?pos=shop&lang=en&section=search&what=obsidium&x=0&y=0