On August 14th, On Death and Cosmos – the new EP from progressive/avant-garde metal band EPHEL DUATH – will be released for the North American territory.  As quoted by Decibel Magazine, the EP is one of the most impenetrable chunk of music offered by any band this year (…) there’s metal being shaped here in a way no one has before. Continuing to be one of the most unclassifiable acts in regard to metal genre, the band is deeply proud of seeing the EP being finally released in the US, after the initial European release date in June. Mastermind and guitaristDavide Tiso commented: It was impressive to see the amount of European press we got with just three songs. Now that we are seeing the same thing happening in the US, it feels like we have the chance to celebrate this fortunate EP twice!

EPHEL DUATH had the pleasure of working with producer and studio owner Erik Rutan (also guitarist in Hate Eternal / ex-Morbid Angel) behind the mixing board of On Death and Cosmos. As a result of this cooperation, Erik Rutan has prepared a video in which he discusses his own view on the new EP and talks about working with the band. The material is hosted at this location:

The EP will be released on the US market by Agonia Records via Sony RED distribution as: digital download, digipack CD and (for the first time inEPHEL DUATH‘s career) vinyl, strictly limited to 300 copies along with a digital download card.

Celebrating the US release of On Death and Cosmos, EPHEL DUATH will be featured on the September issue cover of San Diego-based independent metal magazine, Osprey (photo below). 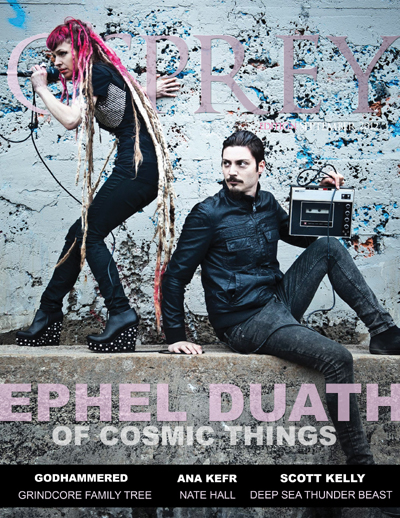