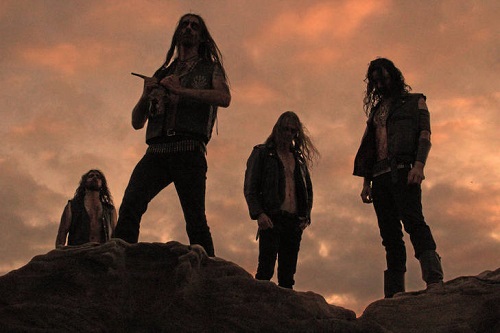 Australian black metal stronghold SEANCE RECORDS announces April 2nd as the international release date for EREBUS ENTHRONED‘s highly anticipated second album, Temple Under Hell. Set to be released on CD by SEANCE and with a vinyl version to follow on April 31st through WORLD TERROR COMMITTEE, Temple Under Hell proves to be an even stronger statement than EREBUS ENTHRONED‘s critically debut album, Night’s Black Angel. Powerful and unyielding, this work of torrid black metal delivers seven hymns revolving around sacrifice, transformation, and illumination. A supreme work of militant esoterica spanning the breadth of classic black metal, modern Satanic cruelty, and abstract themes of darkness: with Temple Under Hell, EREBUS ENTHRONED rekindle the flame with this new libation of cruel, ritualistic black metal in the vein of Funeral Mist, Dissection, and Mgła. Cover and tracklisting are as follows: 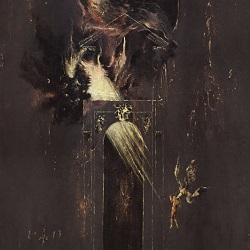 EREBUS ENTHRONED formed in 2006 from the necessity of likeminded individuals to create extreme Black Art and translate profound ritual ceremony to an aural experience. They soon gathered strength in the underground, attracting a following both in Australia and overseas which grew with each release. From their self-released debut demo, Divine Legions of Satan, in 2007 to their split CD release, Spiritual Deconstruction, with Nekros Manteia in 2009, EREBUS ENTHRONED have forged integrity in the expression of darkness and powerful Satanic black metal. Live shows across Australia have fortified their reputation for uncompromising intensity, dark ritualistic practices, and a powerful stage presence, setting them apart as unique and memorable in live experience and atmosphere.

In 2011, their anticipated debut album, Night’s Black Angel, was finally released by SEANCE RECORDS. This live studio recording captured the unconstrained power and dynamics of their ceremonial live experience, and Night’s Black Angel undeniably captured the band’s arcane essence and creative vision. Years 2011 through 2013 saw a national tour, festival appearances, and numerous international band supports and headline shows, each delivered in a powerful and uncompromising manner. A split 10″ MLP with the Polish occult black metal band Blaze of Perdition, entitled Accession of Fire, was released to great praise in the late months of 2013 to quell the ears of the initiated and uninitiated before the release of the highly anticipated second album, Temple Under Hell.

Now, with a taste for blood and becoming, EREBUS ENTHRONED culminated all energies and new compositions in 2014  as they unveil their most evolved work of captivating darkness to date, the powerful and unyielding second album Temple Under Hell. This work of torrid black metal delivers seven sinister, compelling hymns revolving around sacrifice, transformation, and illumination. All tracks have been recorded live to capture the true, uncontrived spirit of each composition with spontaneous live ceremonial energy and pure, unadulterated integrity.

The CD version will be released by SEANCE RECORDS on April 2nd, 2014 followed by the vinyl LP release through WORLD TERROR COMMITTEE on April 31st, 2014. 2014 also heralds the coming of chaos as EREBUS ENTHRONED extend their talons upon the world, with the band’s international live debut at Under The Black Sun Festival in Germany.

A secret concealed in the darkness of death, binding the earth to the Temple Under Hell…