Eskhaton returns with a new album titled ‘Worship Death‘ to be released this year through Chaos Records. The Australian Death Metal band’s previous album shook the world with its new vision on Dark Death Metal, rising up alongside its peers like Portal, Ignivomous and Cemetery Urn to become a force of its own. ‘Worship Death’ contains 11 tracks of renewed aggression, occult art and utter devastation, staying true to its savage style and worship of the dark side.

The artwork is done by Cesar Valladares (Feretrum, Necropsy, Under The Church) and represents perfectly the image of the band and the kind of music it offers. 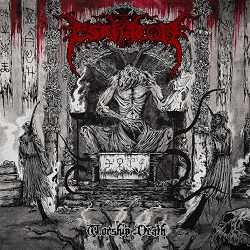