Danish thrash metal band ESSENCE are currently touring Europe supporting the legendary HYPOCRISY and have just recently posted a brand new trailer for their album “Last Night Of Solace“.  The album was released on March 29 via NoiseArt Records and is available as limited CD in slipcase incl. bonus track!

On April 17 the record is going to be officially released in Japan as well as some other Asian countries through Spiritual Beast. This edition will include 3 exclusive bonus tracks and the front artwork is going to be the cover by Eliran Kantor.

“It is an amazingly huge honor for us to release an album in Japan and other parts of Asia! We sincerely hope that the metal heads in Asia will come to like our album and have as much fun with it as we had recording it. One of our dreams is to play over there and with this release we are one step closer to visiting our fellow music lovers in the far East!” 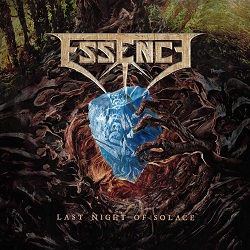