“Saivon Lapsi” was recorded at the Tico-Tico Studio with Ahti Kortelainen and Janne Tolsa in spring 2012. It was mixed by Mikko Karmila and mastered by Mika Jussila. Travis Smith created the album artwork, which is available below.

The band recently posted the video for the song “Swan Saivo“, which will also be part of the limited edition of “Saivon Lapsi”. It was produced by Mutant Koala Pictures. Enjoy it here: http://youtu.be/XQtFxxP3HoA 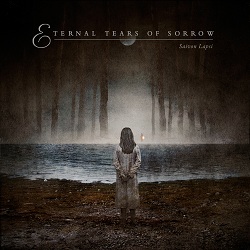 EToS’ guitarist Jarmo Puolakanaho explained the meaning of the album title in an interview with Headbanger’s Helsinki as follows:

” ‘Saivon Lapsi’ could be translated as ‘Child of Saivo’. And Saivo is the underworld of the Saami people, the people of Lapland. It basically is another story in the Angelheart series as well as the series of our stories of Lapland and Northern Finland.”

ETERNAL TEARS OF SORROW’s seventh album “Saivon Lapsi” is going to be released on February 22, 2013 via Massacre Records!

ETERNAL TEARS OF SORROW – Children Of The Dark Waters