EKTRO RECORDS sets February 21st as the international release date for Gilgamesh, a collaboration between Éva Polgár and Sándor Vály. Gilgamesh is the second joint music project of Éva Polgár and Sándor Vály. The music, based on the 5,000-year-old Epic of Gilgamesh, is pervaded by extreme expressiveness and melancholic minimalism simultaneously. On the borderline of different time dimensions, the work presents an insoluble tension between realization, death, and eternity. Polgár and Vály continue the musical dialogue already featured on their first album, The Mondrian Variations – that is, the acoustic and electronic dialogue of piano, percussion instruments, and samplers. Cover and tracklisting for Éva Polgár & Sándor Vály’s Gilgamesh follow further below.

The art of Sándor Vály (born 1968), a painter born in Hungary and now living in Finland, is characterised by conceptual and philosophical dimension, which he uses to operate in the field of modern art. His work in the field of arts is not limited to painting, but expands to music, cinema, performance art, and literature, creating holistic works of art. Vály’s works form extensive entities. His musical background originates from 1980s Hungary, where he grew up with punk, experimental, and industrial music. His greatest musical influences are, among others, Skinny Puppy, Einstrürzende Neubauten, Laibach, Steve Reich, John Cage, F. Schubert, and J.S. Bach.

Hungarian pianist Éva Polgár (born 1983), a renowned performer of traditional and contemporary music, is currently pursuing a degree of Doctor of Musical Arts at the University of North Texas, where she also holds a Teaching Fellowship in the keyboard department. Éva has won top prizes in piano competitions across the world including the International Liszt Competition in Los Angeles in 2012. She has performed as a soloist, chamber musician, and recording artist in Europe and the Americas. Gilgamesh is the second album in which she is the co-composer. Her compositional style is mostly influenced by Claude Debussy, Béla Bartók, Steve Reich, and Louis Andriessen. 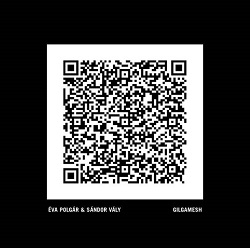 Tracklisting for Éva Polgár & Sándor Vály’s Gilgamesh
1. Prologue
2. Gilgamesh – The City
3. Enkidu
4. Shamhat
5. The Fight of Gilgamesh and Enkidu
6. Humbaba
7. Isthar
8. The Bull
9. Death of Enkidu
10. Umnapistim
11. Close to immortality
12. Back to the City