This weekend sees the return of Hammerfest, the annual metal festival held at Pontin’s Holiday Village in Prestatyn, Wales.

Set to cause a storm at this year’s edition of the festival are Earache’s very own talents EVILE, CEREBRAL BORE, SAVAGE MESSIAH and DIAMOND PLATE, joining a line-up that includes the likes of ANTHRAX, AMON AMARTH, CHIMAIRA and more.  As well as Earache’s new breed of bands, the line-up also includes a number of Earache alumni, including reactivated madcap thrashers LAWNMOWER DETH and Saturday headliners SKINDRED, featuring ex-DUB WAR frontman BENJI WEBBE.

BEN CARTER – EVILE:
“Evile are again going to be let loose at Hammerfest, and we can’t wait to unleash Five Serpent’s Teeth on our cult!  It’s an honour to play the main stage, we always have a great time with great people, and everybody knows more people equals more carnage!  So see you all there for beers and mayhem!!”

KYLE RUTHERFORD – CEREBRAL BORE:
“What an honour to be asked to play on this bill, and straight off the back of the Suffocation tour.  We love playing these kind of shows as they’re not death metal shows, and we stick out like a sore thumb.  This is good for us though, as it gets us playing to people who probably don’t listen to death metal, and gives us a chance to win them over.”

DAVID SILVER – SAVAGE MESSIAH:
“We’re really psyched to be playing at Hammerfest again!  It’s going to be a great show, and we’ll be jammin’ plenty of new songs from ‘Plague of Conscience’.  After that we’re looking forward to kick ass with Diamond Plate!”

Don’t miss these killer bands live at Hammerfest at these times:

Head down to the Earache stall at Hammerfest for a meet & greet with DIAMOND PLATE at 4pm on Saturday and with SAVAGE MESSIAH at 7pm on the same day.

For more information about Hammerfest, go to http://www.hammerfest.co.uk/line-up/line-up-friday.html

Following the festival, DIAMOND PLATE and SAVAGE MESSIAH will be teaming up for three more unmissable UK shows, including a newly-confirmed show in Birmingham.  Don’t miss them at the following shows:

Get tickets for the shows at http://bit.ly/ApOY1M 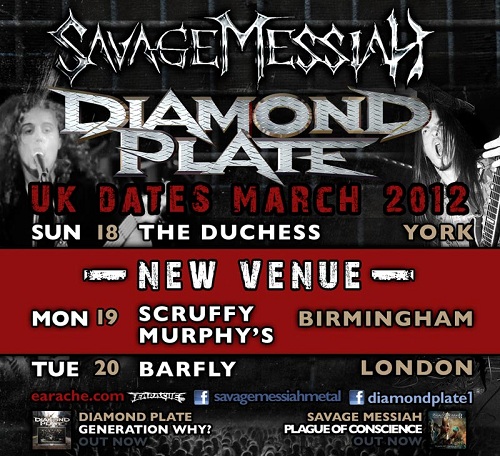 Hot News: Savage Messiah Give Away Last Album For Free On Bittorrent