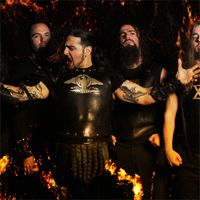 EX DEO issued the following update with regard to their latest masterpiece.

“A time of change is coming…an album of epic proportions to be unleashed, a mad man will rise…feel the wrath of ‘CALIGVLA’ ! Please see below for the final track list. Furthermore, EX DEO will play its first show in MEXICO ever along side TYR and ARKONA on 21 April in Mexico City at Club Circo Valador. Latin legions unite!”