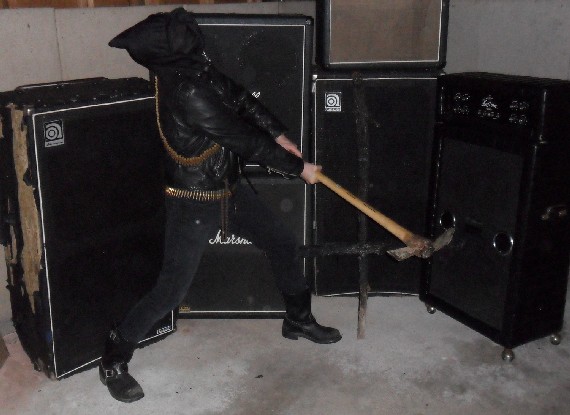 Long known as a cult name in the underground, MIDNIGHT’s irresistible brand of dirty metal-punk raunch is beginning to sway heads in the aboveground, and in full force, as the deluge of critical acclaim surrounding Satanic Royalty is testament to:

• “A goddamned infernal piece of work. For the life of me, I cannot see who would not like this. For in this kingdom of sin, the riff is god and Midnight the (un)holy ghost” – Zero Tolerance [5.5/6 rating]
• “Listen here, this album fucking RULES! Words that I write on here can’t explain how much this album rules!” – MetalManiacs.com
• “A modern-day VENOM: a defiantly untight and proudly blasphemous trio whose aim is complete metal blasphemy” – Metal-Army [“A” rating]
• “Midnight have a success on their hands, an album that will prove both fun for breaking bottles over each others’ domes or picking up the ladies (or gentlemen) of the night…EXCITER meets DECEASED: does that sound appealing? If not, I hate you” – From the Dust Returned webzine [8/10 rating]
• “An aural connection with a pre-shit TURBONEGRO may not be ridiculous at all” – Deafsparrow.com
• “Midnight are fucking awesome. There are so many ways to describe their unique blend of dark, metal/thrash-influenced punk: MOTORHEAD meets TURBONEGRO, CELTIC FROST meets ZEKE, or DARKTHRONE meets sleaze” – Stereokiller.com
• “Right from the first trouncing riff off of first song ‘Satanic Royalty,’ you just know this is going to be one of those very, very special albums” – MetalAsFuck.net
• “Totally tough and gritty, you certainly don’t want to get caught out at night when this album is on the prowl. You might wind up dead!” – Nocturnalcult.com
• “It’s not really thrash, certainly not death metal and definitely not black metal in the Norwegian style, but it gives praise to the goat with a primal blast that would have Pope Benedict throwing the horns!” – WormwoodChronicles.com
• “As only as Hells Headbangers can do, Midnight is a retro-act with just enough of a modern distinction to make it an easy pick for parties, car rides, or a venture to physical therapy for whiplash” – Perpetual Strife webzine
• “Each song is an anthem, true barn-burning power, full of piss, vinegar, and VENOM. All I will say is BUY OR DIE. This review is over” – Circlepit Assassin webzine

Indeed. Over and out: bow down before MIDNIGHT’s “Lust Filth and Sleaze“!!!