Indonesian death horde has given worldwide release to their full-length debut, Hymn to your God, through Dunkleheit Produktionen.

Album track “The Apotheosis” is streaming at this location.

Death metal maniacs are tired of bands who fake it. Some bands offer nothing but merciless rage with little to no substance behind the ire, while others attempt to pass off an unfinished and contrived style or concept. Some bands try to be progressive, while others show off a fake old-school-attitude. EXHUMATION, a young, talented and dedicated group of warriors from Indonesia, commits none of these atrocities. This is a band that delivers a rolling and balanced brand of death metal with the right amounts of melody, anger, concept and great riffing. EXHUMATION strives for independence from their influences and, most importantly, identity.

Their music presents an irresistible honesty, is thoroughly powerful yet always sticks to its own roots by citing the Asian origin. Death metal gourmets will be satisfied and fans of the likes of VADER, HATE or MORBID ANGEL will lick their fingers. This album comes with an excellent cover of “Ritual,” from Canada’s Ross Bay Cult legends BLASPHEMY! 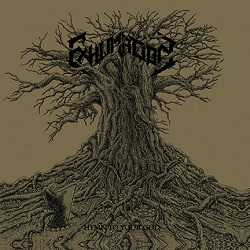 EXHUMATION hails from Yogyakarta, Indonesia and formed in 2008. Heavily influenced by the darkest depth of epic Death Metal hordes, such early Morbid Angel, which were so flawlessly different from the Swedish-styled Death Metal so many others aped. Gaps, Gre and Unan created this band as the founding fathers, with Punto joining in 2010. With his addition, the band had found a vocalist demonic enough to fit the bill. The band developed over time, despite the lack of a stable drummer, until 2011 when Agung joined and completed the horde. Their legion assembled, EXHUMATION was finally able to make their first ritual, a three-way split with allies Nocturnal Kudeta and Goddess of Fate. Shortly afterward, work began on their full-length debut,Hymn to your God.