French heavy metallers EXISTANCE will release their first full-lenght album, “Steel Alive” on 25th April via Mausoleum Records. EXISTANCE entered the studio in late 2013 to record their debut full-length album entitled “Steel Alive“. The result “One hell of an ass-kicking album that proves true metal is“. 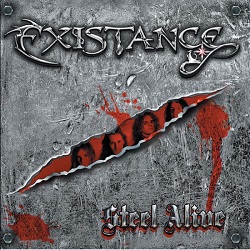 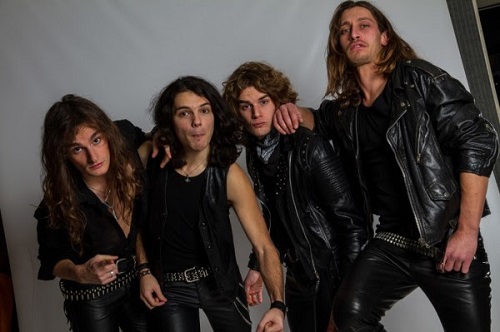 EXISTANCE was founded in 2008 by Julian Izard (lead vocals & guitars) and Tom Drouin (bass), who shared a common goal of keeping the musical spirit of the 80′s Heavy Metal alive. If the last name Izard sounds familiar to the historians among you…well the apple doesn’t fall far from the tree – like father like son, Julian Izard is the son of Didier Izard, who was the vocalist with French speed metal band, H–Bomb, which regardless of featuring French language lyrics, and in spite of only being active from 1983–86, left a serious footprint on the European Heavy Metal scene of the 80s. Officially only releasing one EP, “Coup De Métal” and one album “Attaque“, the numerous bootleg albums available today bear testimony to their status and influence on a next generation of bands, including Izard junior’s EXISTANCE.

By 2009 the EXISTANCE line–up completed, the band started out rehearsing and playing covers of such Hard Rock anthems like “Dallas 1 PM” (Saxon) and “Cold Sweat” (Thin Lizzy), refining their chops and become a lean and mean hard rocking machine. Not long after they began to write their own songs.

In 2010 EXISTANCE released the obligatory demo. Four tracks were recorded, which enabled them to play a substantial amount of concerts across France with forays into Belgium and the Netherlands. They were also invited to perform at numerous festivals such as: the Paris Metal France Festival IV (PMFF IV), the Isaria Festival, Vouziers Festival (#21), twice at the Zicophonies Festival (#15 and #16), Long Live Metal Festival (edition #5), Rock ’N’ Metal Convention (#14).

In 2011, the band returned to the studio and produced another eight tracks. The German label High Roller Records released the 2nd set of recordings in April 2012, both on compact disc and vinyl, distributed worldwide via Soulfood. Thanks to the release being well received by the international media, EXISTANCE could now count on a truly internatuonal fan base.