And today you can listen to the first track chosen for the promotion album of the album. “Hellphoria” is available on Metal Mind Productions’ official channel  on YouTube in THIS location.

„Work on the album took us quite a long time and of course we have encountered a few difficulties. Luckily, we have managed to solve them. The interest of such a big company as Metal Mind Productions lets us believe that we did something good. We are convinced that thanks to our co-operation our music will reach a large number of fans of melodic heavy metal not only in Poland but also worldwide.” – says Piotr ‘Voltan’ Sikora, the band’s keyboardist. 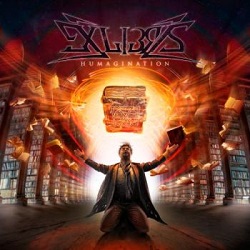 The band was formed in late 2003 by Daniel Lechmański and Piotr Sikora. Their first studio album “Skyward” from  2006 received quite good reviews. Over the next few years, the bands struggled with line-up changes within the rhythm section, but continued to create music and to play occasional concerts. In the meantime, Daniel Lechmański joined Chain Reaction and recorded three albums with them. Also, Piotr Sikora is a member of Leash Eye since 2009. In January 2012 the band started to record their second album – “Humagination”. During the recording time, it turned out that their vocalist Marcin will not be able to complete the recordings. Krzysztof Sokołowski aka Mistress of the Night became their new frontman. As a result, the recordings ended in early 2013.