“ZERO G“, a brand new song from doomy heavy metallers EXORCISM, who feature in their ranks guitarist Joe “Shredlord” Stump (RAVEN LORD, ZVEKAN, HOLYHELL), can be streamed now. The track is taken from the band’s debut album, “I Am God“, which will be released April 25 worldwide via GoldenCore Records/ZYX Music. The ‘lyrics‘ video can be viewed below. 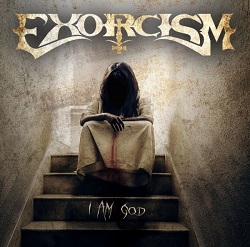 EXORCISM’s music is doomy and lush while it flows lava like down your spine, it features dark-themed lyrics and melodies that could haunt you for life.

‘God created the heavens, while man creates his own Hell‘