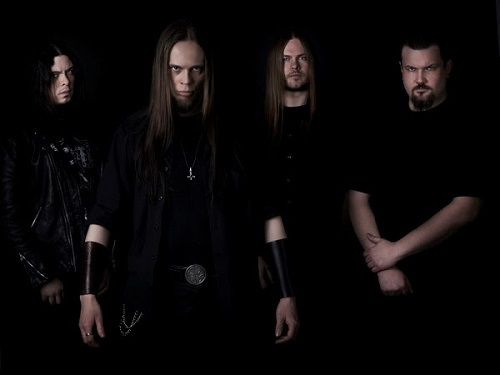 Extreme Pagan Metallers FORTID are celebrating the start of 2014 with the release of a video for the title track from their 2012 album “Pagan Prophecies”. The video was filmed and edited by Hannu Mikola of Visual Vortex and includes footage of the band performing live during their 2013 tour of Finland, as well as a series of images that point to the doom of mankind . Mikola accompanied the band throughout the tour and filmed their performance of the song each night. “Pagan Prophecies” can be seen on FORTID’s YouTube channel at http://youtu.be/xC_ptz5mAb4

FORTID was originally formed by Icelandic musician Einar Thorberg (CURSE, DEN SAAKALDTE) as a solo project in 2002, and the subsequent release of what is known as the Völuspá Trilogy, comprising three full-length albums, “Thor’s Anger”, “The Arrival of Fenris” and “Fall of the Ages”, established FORTID’s reputation and led to Thorberg’s move to Norway between the release of the second and third parts of the trilogy, where he recruited a permanent lineup. Aside from Thorberg on guitars and vocals, FORTID’s current lineup includes Øystein Hansen (ex THORNBOUND) on guitars, Rikard Jonsson (FORSEFED HORSEHEAD, ex DEJECT) on bass and Daniel Theobald (CURSE, DEN SAAKALDTE, ETHEREAL FOREST) on drums.

Work on the band’s fifth full-length album has just been completed and is ready for the mixing stage, and, whilst not wanting to go into too much detail yet, Thorberg recently revealed that the lyrics for the, as yet unnamed, album will be in Icelandic.

Commenting on the video Thorberg, who was recently announced as the new frontman for Norwegian Black Metallers DEN SAAKALDTE, said that the best way to explain the concept behind “Pagan Prophecies” would be through the lyrics for the track, which are as follow:

In the void, a primitive being
Was spawned in the chaos of fire and ice
The antonym elements, forcing existence
Yet struggling towards self demise

Tyrant demigods still reign with bottomless hunger
A black hole, pressuring upon destruction
As the elements of life and death collide

…Burning the idols of war

We are the children of murderer sons
Struggling towards self demise

More information about FORTID can be found on the band’s Facebook page at https://www.facebook.com/fortid

Six tracks from FORTID can be heard on the band’s SoundCloud page at http://soundcloud.com/fortid/sets/fortid

Hot News: Fortid Frontman Issues Update On Progress Of Next Album And Talks About Side Projects