The following bands have been confirmed to play EXTREMEFEST:

SONNE ADAM
SONNE ADAM is Hebrew and stands for „hater of man” – pretty fitting for the sound of the band that was founded in 2007 in Israel! Those guys bathe in antisocial old school death metal that often reminds of genre icons such as ASPHYX, MORBID ANGEL or AUTOPSY. “Transformation” saw the light of day in 2011, and towards the end of 2012 SONNE ADAM released the EP “Messengers of desolate ways”: a compilation of old and rare tracks. A must-see for all trad death metal freaks at the EXTREMEFEST!
More info: http://de.extremefest.eu/?page_id=1516&lang=en

SCARLET ANGER
SCARLET ANGER is a luxembourgish Thrash Metal band which was founded in 2007 by vocalist Joe Block and guitarist Fred Molitor. They have yet released a demo as well as 2 EPs. In 2007, their first EP „La realidad es triste“ was released and allowed them to play numerous gigs.
More info: http://de.extremefest.eu/?page_id=1518&lang=en

Get your ticket, or your Extremepack special offer incl. ticket, T-Shirt and CD for 69,00 Euro, on www.hardticket.eu
In the next couple of weeks we`ll present you loads of other impressive bands! 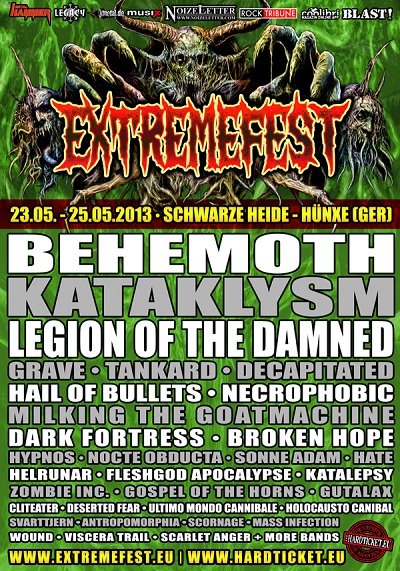