The return of the extreme… The second chapter! Crushing skulls since 2012!

2012 marks the unholy birth of the one and only EXTREMEFEST – the first issue of the festival sated the bloodthirst of thousands of extreme metal fans in Germany, Austria and Switzerland over the course of three days! We partied with big names such as EXODUS, SUICIDE SILENCE, CANNIBAL CORPSE, NASUM or ASPHYX and sweated in countless circle pits…over 70 bands with a stylistic variety ranging from black, death, thrash, grindcore all the way to modern deathcore sounds decided to drop by. Unbeatable, you say? Fear not: the lads and ladies behind the EXTREMEFEST are on a mission to deliver another scorching line up for 2013 – to make sure you`ll get the most brutal party in this solar system!!!

It is with great pleasure that we can now unveil the first confirmed names for the EXTREMEFEST 2013: 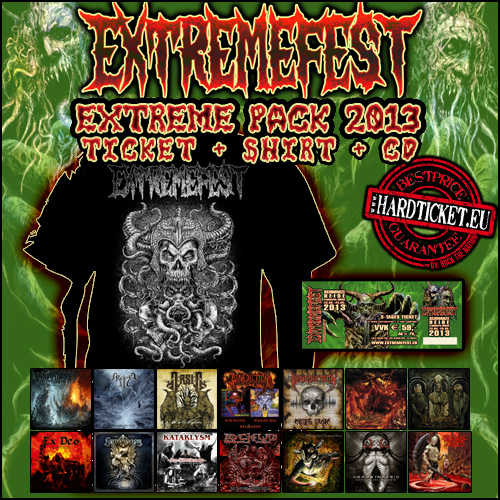 Of course this is only the tip of the proverbial iceberg – in the next couple of weeks we`ll present you loads of other impressive bands!

– One of the most beautiful festival areas in Germany!
– Fan-friendly staff and security!
– Fan-friendly prices for food and drinks!
– „All you can shit” shower / toilet flatrate for only 10 Euros!
– Party tent!
– Breakfast service!
– Short distances!
– Great atmosphere!
– Shuttle buses from the Dinslaken train station for only 3 Euros!
– Central location in the heart of the Ruhr area!
– Excellent connection to airports etc.

ATTENTION: due to problems with the location, camping and parking has to be separated in 2013! Of course you can find plenty of parking space very close to the festival and camping areas.

There will be an early bird special available from October 5 – 15, for only 59 Euros you can order the ultimate EXTREMEPACK incl. Ticket, shirt and CD! Starting October 16, the price will be raised 10 Euros, so order right away for special price until October 15. 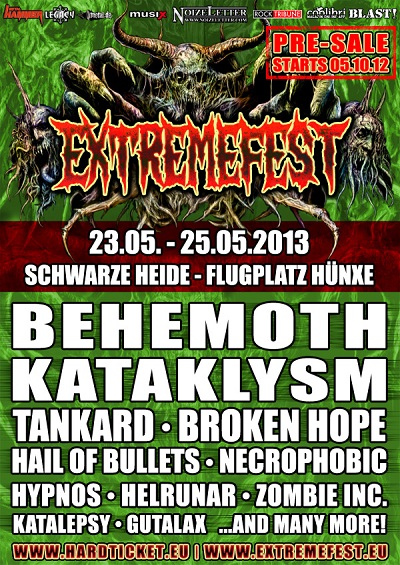 Hot News: Extremefest was attended by almost 20.000 fans! Thanks to everybody! Win 2 VIP tickets for 2013! Survey available!