Blackened classic death metal from the depths of spain, we’re happy to announce the publishing of DECAPITATED CHRIST‘s 4th full length album “Arcane Impurity Ceremonies” on CD and for Download. 9 new war anthems full of catchy riffs, hammering drums and soul-vomiting vocals will blow you away. Their mainly influences you can find in the early works of Morbid Angel, Immolation, Bolt Thrower or Possessed. 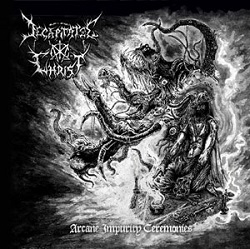 A first track called “Human-Eating Herd Of The Damned” song is available for streaming now at this location: https://soundcloud.com/fda-rekotz/decapitated-christ-human

The album was mixed and mastered by Dan Swanö at Unisound Studio, Artwork by Cesar Valladares and will be out of the unlight on April11th 2014!

1- And the Carnage Begins
2.- The One Who Marches Behind the Line
3.- Human-Eating Herd of the Damned
4.- Hell’s Everything
5.- Sabbath of the Blind Dead
6 – When War Brings Glory (Cenotaph 666)
7.- Hexenhammer
8.- Those Who Walk Slowly
9.- Ancestral Rites Evoking Primigenium Horrors

GOLEM. This legendary and absolutely underrated band started back in 1989. In the 1990s they have released two of the best Death Metal albums ever, which have never been released on vinyl. Until now!
FDA Rekotz is re-releasing both “Eternity – The Weeping Horizons” (1996) and “The 2nd Moon” (1998). 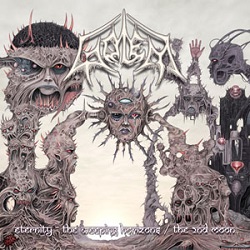 Both albums were remastered by Andreas Hilbert (head of the band) and to top it of Mark Cooper has created new killer artwork. GOLEM are influenced by bands like CARCASS, DEATH or MORBID ANGEL and are surely on the same musical level. They never got the luck to be pushed by one of the big record labels at the time (early/mid 90s). They are still more or less active and the time has come to rise above and beyond, to show their great compositions to a wider audience.

Now it’s time to re-release both hard to find albums for the first time ever on vinyl (2LP), as well as Double CD and for Download! The vinyl will be limited to 100 transparent green and 400 rotten black copies, printed lyrics, old pictures and more than 80 minutes pure fucking Death Metal at it’s best.

Double-CD, Double-LP and Download will be unleashed from the grave on April 4th, 2014! Soundcloud link: https://soundcloud.com/fda-rekotz/golem-throne-of-confinement