The Danish death metal band Ferocity have just released their second music video from the bands upcoming album ”The Sovereign”, the video is for the album’s title track and it is directed, filmed and edited by Mnemic’s guitarist Mircea G. Eftemie.

The album “The Sovereign” will be released worldwide through Deepsend Records on September 3rd.

The video can be found here: http://www.youtube.com/watch?v=ZIGH09Er8EA

Bassist Lars Ole Bøgel, had the following to say about the video and album:

“After releasing our first single and live video for ”…And the Rest is Silence” this video is our first studio music video from the album ”The Sovereign”. The video was shot at The Wax Factory in Copenhagen and was directed, filmed and edited by Mircea G. Eftemie who also did the cover artwork for ”The Sovereign”. Mircea has previously done videos for big acts as Hatesphere, Illdisposed and Volbeat just to mention a few, so we are extremely proud to finally be able to share his work with our fans!!

Our album ”The Sovereign” is out worldwide through Deepsend Records on September 3rd. The album consists of 10 tracks and the reviews it has recieved so far is very promising; the first review was done by the living legend Frank Rini and besides scoring 9,5/10 it was reviewed as ”an almost perfect release” and labelled ”buy or die”. Make sure to keep an eye out for Ferocity!!” 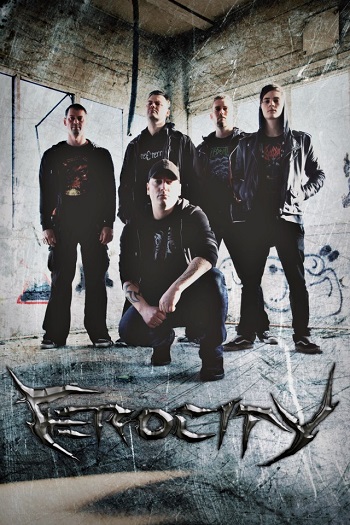 Ferocity will be hitting the roads with label mates Corpus Mortale in September/October, the dates are as followed:

The band’s first music video of the album, ”…And the Rest is Silence”, can be found here: http://youtu.be/b89vjBDMwLg

Hot News: Ferocity – ‘The Sovereign’ Out Now on Deepsend Records