Already for the third time Fimbul-Festival will take place on 17th of September 2011. As in the preceding years, the City Hall of Fürth is the scence of metallic action. All fans of Viking and Folk Metal have the rare chance to see one of the best billings ever to enter a stage.

Real headliners for this year are the Swedes of Månegarm who will play a 75 minutes show. They will be flanked by SuidAkrA who will stuff down an extra-long show in the neck of the well-disposed fan. In the process, the Celts from North Rhine-Westphalia will present their new album Book of Dowth which, if you believe the rumors, will cause quite a stir. In such an illustrious company the men of Menhir may not be missing. As founders of Pagan Metal in Germany they definitely attained cult status. With their opus Hildebrandslied they set a milestone (or rather a menhir) in German metal history. The Norwegians of Voluspaa (who released a limited LP via Einheit-Produktionen) will also introduce their new material on Fimbul-Festival. This exceptional band is a must-see for all Folk Metal fans! Andras from beautiful Ore Mountains in Germany will use the opportunity as well to present their new album. From Thuringia, Fimbulvet joins the line-up with new material. With Kromlek an experimental Black Metal band was won over the festival that will broaden the variety of styles. Rather different tones are played at Slartibartfass. This band has gained a respectable reputation by now through high valued music and innumerable live performances. They want to improve their reputation on Fimbul-Festival even more. As special guests we may present this year the band Vrani Volosa. With their new album Heresy on board, which can scarcely save itself from outstanding reviews, they will provide for some diversity with their clean vocals. The billing is completed by the Folk Metal band Vroudenspil. Apart of their new album, the band will bring an awesome mood and Party Metal along. As a little extra, Lars Jensen, band-leader and only permanent member of the band Myrkgrav will present you material of his new and soon to be released album within the framework of a listening session!

Make sure to get your personal ticket via our homepage www.fimbul-festival.de or via one of the ticket agencies (Nuclear Blast, Metaltix, Düsterwald Produktionen, Nürnberg Ticket GmbH, Naturmacht Produktionen or N-Metal). For all Fimbul-Festival enthusiasts there is again an advance sale package which contains already a festival T-shirt, a poster and a bumper sticker. You are well advised to not hesitate for very long and to make sure to get your own ticket since the tickets are strictly limited. 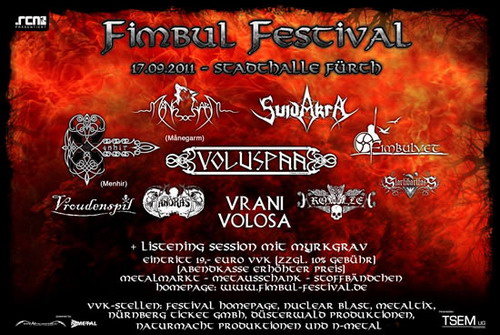