Doom and sludge titans CONAN, BLACK MAGICIAN and IRON WITCH will set the final cast for the wall of sound which has become Damnation Festival‘s fourth stage.

While, Polish post-rock quartet TIDES FROM NEBULA add the final touch to an eclectic EYESORE MERCH STAGE which will also be graced by Cult of Luna, Crippled Black Phoenix, The Ocean, Rosetta, Year of no Light and Dirge.

Festival director Gavin McInally said: “Not only is this by far the best line-up we’ve ever put on, but it is also the most pleasing as we’ve been able to add a fourth stage with the support of fans who’ve bought so many tickets so early in the year while reducing the number of our much-hated clashes too.

“If doom, sludge and post-metal is your thing, you’ll be able to watch every band from Iron Witch to Cult of Luna without wandering more than 20 yards while fans more interested in the Terrorizer and Jager stages will be able to catch the likes of Shining, Negura Bunget, God Seed, Vallenfyre, Katatonia, Rotting Christ and Carcass in one relentless day of music.

“At just £34 a ticket, we believe this line-up deserves a ‘Sold Out’ plaster across it and with five weeks of sales to go, that’s our target, so please keep up the support!” 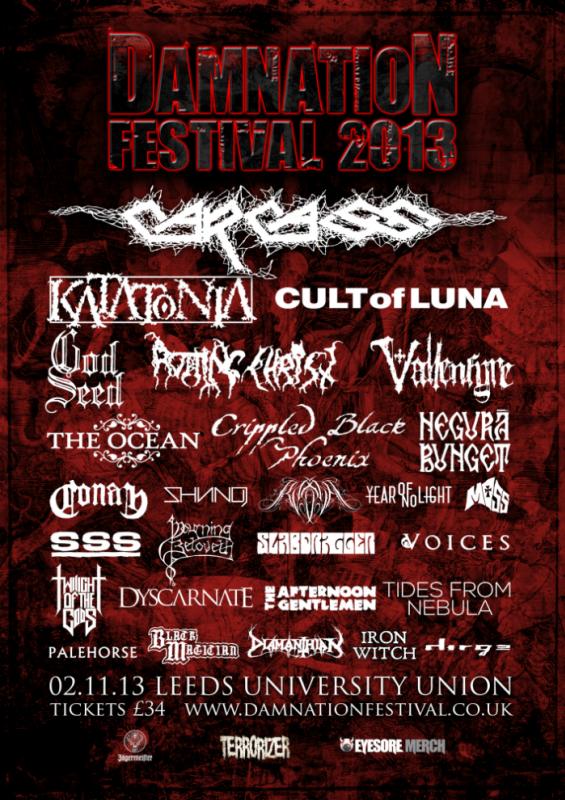