One of the most memorable pioneers of Finnish 1st wave death metal, Convulse were there in 1990 with bands such as Xysma, Disgrace and Abhorrence to create the scene which was to become legendary. Formed in Nokia in early 1990, the band was quickly snapped up by Thrash Records from France, and the future cult classic album World Without God appeared a year later.

After a 18 year break Convulse returned in 2012 and played a few comeback shows in Finland this year. The band has already been confirmed to play Maryland Deathfest 2013, with more live appearances in the works for the near future. A new Convulse vinyl EP, with two brand new tracks, is scheduled for a November release, and a new full length album can be expected in 2013. The band has signed to Svart Records, who will handle both the EP and the album worldwide. 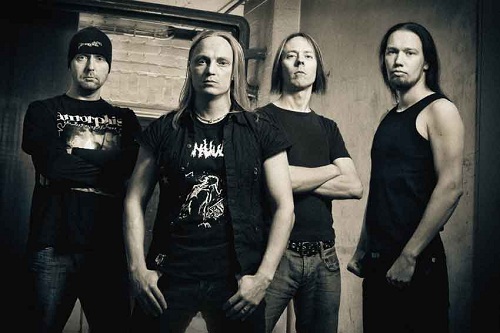 “Our new material has a strong old school death metal feel to it, and the band is tighter than ever before. When recording, we plan to concentrate on the energy brought on by playing everything live – no triggers or Pro Tools. Nothing beats a well rehearsed band playing live, be it on stage or in the studio”, says Rami Jämsä, the man responsible for lead guitars and vocals.