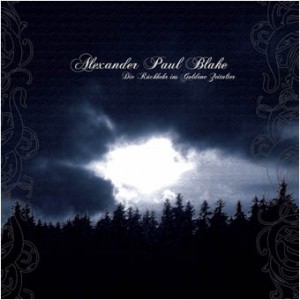 Einheit Produktionen will release “Die Rückkehr ins Goldene Zeitalter” April, 27th 2012 – the first solo album of Alexander Paul Blake (Eden Weint Im Grab). You can expect an archaic journey into the depths of the forests, which has not only been inspired by romanticism, but also by Henry David Thoreau’s novel “Walden” (1854). The music offers epical, melodic Black Metal with folklore sounds, which will be appreciated by fans of early Ulver, Agalloch, In The Woods…, Wolves In The Throne Room or Emperor. “I always had a kind of romantic idea of Black Metal”, comments the multi-instrumentalist. “This music touches me the most when it has a natural mystic mood, lyrical depth and an archaic magic – that’s exactly what I tried to capture with this album.”

Recently the first official webpage www.alexanderpaulblake.de went online, and a nearly virginal Facebook profile waits for “likes” at http://de-de.facebook.com/AlexanderPaulBlake New snippets from the album will be posted regularly on the website mentioned above until the release. Furthermore there’s a trailer online.