Philly-based extremists Fisthammer are set to play the opening date of their “Devour America” tour in support of their debut album, Devour All You See, tonight in Harrisonburg, VA.

These battle-hardened DIY road warriors will spend the next 26 days traveling across the country, leaving a trail of splintered stages, busted bar stools and broken necks in their wake. Devour All You See is out now and available from the band or via Horror Pain Gore Death Productions. Check out selections from the album at  soundcloud.com/fisthammerband.

Cities to be devoured are as follows (check local listings for venues): 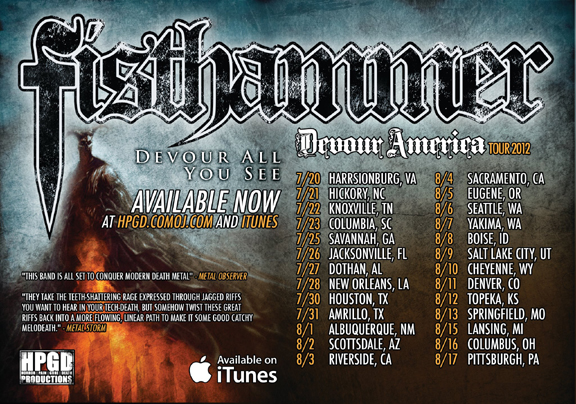 Fisthammer formed in winter of ’08. After months of rehearsing, they recorded their first three track demo with brothers Mike Sabolick and Doug Sabolick (A Life Once Lost.) In fall of ’09 they returned to the studio to record a six track EP. In early 2012, the band released their full-length debut, Devour All You See, via Horror Pain Gore Death Productions. Fisthammer has toured the US numerous times since their inception and plans for even more touring in the future.

FISTHAMMER – Devour All You See