2014 has seen UK death/thrash outfit Flayed Disciple back in the studio recording a new EP and follow up to the 2012 debut album ‘Death Hammer’. Chuck Creese, who produced the ‘Ejaculate While Killing’ EP in 2010, was back at the helm recording the new record.

Guitarist Jon Whitfield comments, “The new EP will remain untitled and released on a stunning 12″ vinyl as well as digitally. This release is to showcase the bands new sound and energy, and our new drummer Rich Lewis who joined us in 2013.” 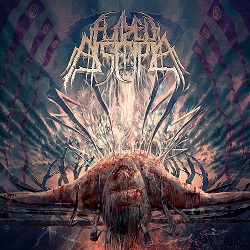 ‘Flayed Disciple’ EP will be released May 24th via Bethlam Records.

The EP contains three new tracks; ‘Sick Abomination’, ‘The Gates Of Bedlam’ and ‘The Maniac’ and with over 20 minutes of music, Flayed Disciple are set to deliver more of the epic thrash style that they began to carve for themselves on ‘Death Hammer’. A music video for ‘The Gates of Bedlam’ will also be released coinciding with the vinyl release.

Since the release of Flayed Disciple’s 2012 debut album ‘Death Hammer’, things have moved forward greatly and at great speed. With massive acclaim from the metal media Flayed Disciple gained coverage in mainstream magazines such as Metal Hammer & Terrorizer. The band released two music videos, ‘The Shrine Of Dahmer’ and ‘The Westboro Massacre’; the latter, which went on to reach over 90,000 views on YouTube.

The band have toured up and down their native UK as well as Europe and beyond with heavyweights such as Vader, Aborted, Blood Red Throne, etc. The band have played numerous festivals including the UK’s Bloodstock Festival, Hammerfest and they made an appearance at the Indian Metal Fest in Bangalore alongside Gojira.

Flayed Disciple are now seasoned live players, and have a UK tour from May 18th to 24th as main support to Earache Records’ thrash maniacs Bonded By Blood. The band also has a 13-day European tour from October 6th to 18th in support of another Earache Records’ band Cerebral Bore.