Skagos is an altar of life, crafted by living hands, guided by a living mind, in a world dead, but ever dreaming. The band formed in 2007 in the depths of the Cascadian black metal scene as a two-piece that released their first three albums initially on cassette only. Ást, their first full length, was released later on CD by NHR records (and more recently on vinyl) to great critical acclaim, with the Encyclopaedia Metallum calling it an “atmospheric masterpiece”.

Now, Skagos will release their second full-length album, the incredible Anarchic, via Flenser Records on April 23rd. This album is a three-year work in progress and features two tracks that contain sub-track like “movements”; “Anarchic I-IV” and “Anarchic V-VII” , at over 60 minutes in length. A rough version of this album was released online last year via Skagos’ bandcamp page and has since been expanded upon with over 17 minutes of new music for this exclusive Flenser release.

Skagos‘ sound has shifted a bit with Anarchic; a departure from Ást and an expansion of their work of the split with Panopticon (2010, The Flenser). Ethereal and atmospheric instrumentation – at times almost hypnotic – is prevalent on the record and often met with visceral guitars and gutted growls. Singy folk elements can also be found on Anarchic, making this an incredibly engaging and dynamic listen. Still lyrically complex focusing on the death of the Earth and the renewal inherent in cyclical time, Anarchic showcases Skagos at their most fully-realized state as a band thus far with an almost symphonic feel to this new album.

Look for Anarchic to hit streets on April 23rd, 2013 with more information coming soon from The Flenser (and pre-order CD copies here). 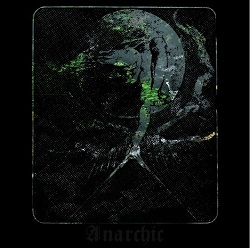