Tampa merchants of misery SERVANTS OF THE MIST are entering the studio this month to record the follow-up to last year’s well received Suicide Sex Pact EP (released December 10). The new EP will be called Gross Knowledge of Genital Mutilation and will again be self-released on digital format at servantsofthemist.bandcamp.com. 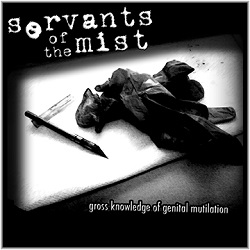 Proudly following in the giant footsteps of Suicide Sex Pact, the new material will again carry themes of sorrow and depravity with even more devastating sonic results.  In promotion of Gross Knowledge of Genital Mutilation the sextet will be touring this August, spreading their bitterness and misery throughout the East coast of the United States.

Digital copies of Suicide Sex Pact are available upon request for those that just can’t wait to dive into the murky deep end of the SERVANTS OF THE MIST pool.

From the muggy, death metal drenched wetlands of Tampa, Florida comes a band with a sound not generally associated with this particular region- Servants of the Mist. Unlike most doom metal and sludge from the American South, the usual bluesy “stoner” trappings are virtually non-existent in their depressive, melancholic brand of funeral doom. Formed in 2010 by guitarist and chief songwriter Ed Tobar, Servants shuffled through several line-up changes before the entry of vocalist Richard Smyth Jr. Still trying to find their own unique sound, the group initially embraced the more traditional doom sounds of Black Sabbath and Saint Vitus, flirting with elements of gothic rock for enhanced melody and atmosphere. After several months of inner turmoil in the ranks, Smyth also assumed the role of drummer, in addition to his duties as a vocalist. For the next couple of years Servants would carry on as a three-piece, with Tim Straubb, Tobar’s childhood friend, as bassist. During this period the group would distribute several self-financed demos throughout the Florida underground and share the stage with Jucifer as well as Tampa Bay death metal heroes Ulcer, After Death, and the Tardy Brothers (of Obituary fame).

Fast forward to the end of 2012. The world may not have ended, but the first era of Servants of the Mist certainly had. After parting ways with bassist Straubb, a new lineup was being constructed. Smyth enlisted several friends to round out the group’s latest roster- RJ Howley on drums, Kenny Nguyen on bass and Jason Kleim on keyboards. Now a five-piece, Tobar’s dissonant riffs became heavier and darker, while Smyth’s vocals ceased to include the moments of melodic crooning he had incorporated since the beginning, now favoring an anguished blend of screams and guttural growls. This new incarnation would record and distribute the Daydreamerdemo and begin creating a buzz throughout the Florida metal community. However, 2013 would see yet another change in the Servants of the Mist camp.

In the interest of creating a thicker, heavier drone, Kenny shifted his role to second guitar. In addition, Jason assumed the more fitting position of bassist. This line-up would record the Suicide Sex Pact EP, released in an exclusively digital format through Bandcamp.com. Eschewing the melodic sensibilities of the group’s earlier work, the 28-minute opus consisted of the band’s darkest, heaviest material to date- three speaker shattering hymns of self-hatred, addiction and depravity. Following the release of Suicide Sex Pact, the band would round out its lineup with the addition of Brian Schille on keyboards. 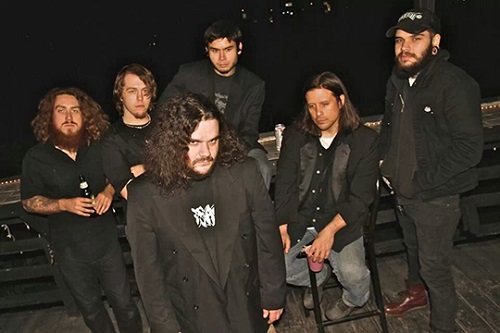 SERVANTS OF THE MIST are: