Dark Metallers FOSCOR, who have been celebrating the Tenth Anniversary of the recording of their first promo, have decided to go old-school by releasing live material in Pro-Tape format. “Deu Anys Vers la Foscor“, which translated from the band’s native Catalan means “Ten Years Towards Darkness”, was originally released as a DVD last year on the Darkwoods label and included live footage of the band’s appearance at the Sala KGB in Barcelona and it is the soundtrack of that appearance has been released on the tape.

The Pro-Tape of “Deu Anys Vers la Foscor” is strictly limited to 100 hand-numbered copies, and is released in February on Ruptura Records. Track listing as follows: 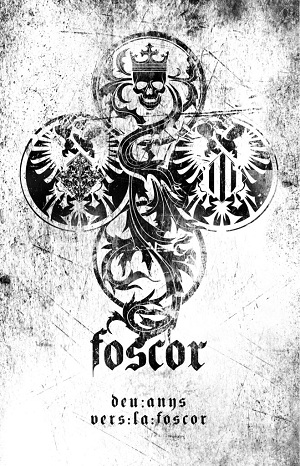 SIDE A – SENY-
I. Groans to the Guilty
II. Raids to Punishment
III. The Smile of the Sad Ones
IV. Searching a Seal of Pain (The Beauty)
V. Melangia

Formed in 1997 in Barcelona, Spain, FOSCOR’s lineup comprises Falke (SOUL ASIDE, FAYRIERIE, ex-LUX DIVINA) and A.M. (ex-VIDRES A LA SANG) on guitars, Fiar (MELANGIA, DAWN OV HATE, CABESTRO, live session vocalist for GRAVEYARD) on Bass and Vocals and Nechrist (ex-SHEMHAMPHORASH) on drums. The band is currently working on their fourth full-length album, a follow up to 2009’s “Groans to the Guilty”, for which a label is currently being sought. Like many bands that started out initially playing pure Black Metal, FOSCOR have developed and expanded their sound, and the new album promises a few surprises.More information about FOSCOR can be found on the band’s website at http://www.foscor.com

Hot News: Dark Metallers Foscor Finish Work On Fourth Full-Length Album And Launch Into A New Era For The Band