Norwegian progressive metal quintet Frail Grounds recently signed a deal with UK based indie label Hostile Media to see the release of the bands debut album ‘The Fields Of Trauma’. Mixed by Øyvind Larsen (Lionheart Studios) and mastered by acclaimed producer Jens Bogren (Fascination Street Studios) ‘The Fields Of Trauma’ was originally self-released by the band in 2012. This release sees the record getting proper distribution for the first time.

Frail Grounds formed late 2005 with a musical vision to create interesting and flowing soundscapes, merging elements from different genres ranging from traditional heavy, progressive and extreme metal, yet always maintaining a melodic baseline. The band released their debut record, an EP titled ‘Corrosion’ which led to many in the media earmarking the band as one to watch.

Most of 2010 was spent in the studio as the band began work on their concept debut album ‘The Fields Of Trauma’. The story follows an expedition deep into Siberia, questioning how far a person might go under extreme circumstances in order to achieve a sense of resolution.

Vocalist Morten Andre comments, “We are very excited to be presenting “The Fields of Trauma” to the UK metalheads and beyond.”

“The album took a long time to finish, but listening to it now we are confident it was worth the effort and time. There are so many details in between the musical layers; hopefully you will hear something new every time you listen to it. This musical endeavour is wrapped up by a faustian inspired conceptual horror story, which fits well with the musical theme. Enjoy!”

“First time listeners, expect a chilling musical journey leading you through acoustic melancholic moments and into more brutal epics! Throughout this trip you will be treated with lots of melodies, guitar solos, heavy riffing and complexity leading up to the grand finale, the emberstorm!” 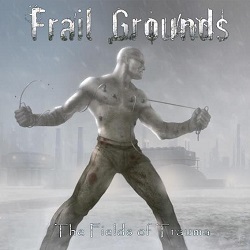 Hot News: Frail Grounds ‘The Fields Of Trauma’ Out Now!