The vastly unknown yet magnificent French Death Metal originators AthanaTheos have finally made their self-released, 2012 album entitled  ‘Alpha Teistic‘ entirely streaming and available from their Bandcamp page at this location: http://athanatheos.bandcamp.com/

‘Alpha Teistic‘ is a 56 minutes long, conceptual album. It concentrates on an historical analysis of religious system then a critic, and a deconstruction of it.
Musically, the band utilizes strong elements of death metal but doesn’t limit itself and expands into blackened and thrash metal territories as well. There’s also an element of Gregorian chants present in the music and completely arranged and performed by the band.
The impact of AthanaTheos music is brutal and devastating as well as liberating. An experience that has yet to be heard and felt many times in order to be understand in its full complexity.

You can purchase ‘Alpha Teistic‘ album both, digitally and physically, from band’s Bandcamp: http://athanatheos.bandcamp.com/ 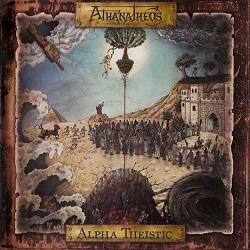 Track listing:
‘Dawn Of Genesis’
‘Freedom Shall Never Come From God’
‘Everything That Is On The Earth Shall Perish’
‘To Harden The Heart’
‘Purification By Primordial Waters’
‘You Are Not’
‘As Your Lord Was In The Storm’
‘Ghost And Chimera’
‘The Souls’ Congregation (Soul Injected Part II)’