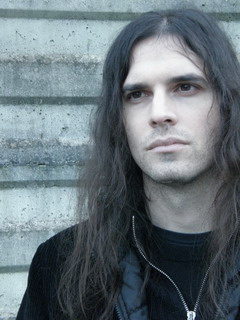 FROSTMOON ECLIPSE founder and guitarist Claudio Alcara features on two tracks on “Patience”, the forthcoming four-track EP release from GODHEADSCOPE. “Patience“ is the third release from the Californian one-man project formed in 2006 by M. Rosin, and, according to Rosin himself represents GODHEADSCOPE’s “most complete bridging of modern composition and ambient with art-rock and folk”. The EP will initially be released as a digital download on the 29th November at godheadscope.bandcamp.com before being available through all the usual digital retailers on Meristem Music. More information about GODHEADSCOPE can be found at www.godheadscope.com

Track listing on “Patience” as follows:
1. Patience
2. Solidarity
3. Medusa In the Cistern
4. The Screaming Mound

Alcara, who contributes guitar melodies for the tracks “Solidarity” and “The Screaming Mound”, is himself due to release an album for his STROSZEK project in December of this year on Hypnotic Dirge Records. “Sound Graveyard Bound” will be the third full-length release from STROSZEK, the band that allows Alcara not only to perform vocals, but also to display his consummate guitar skills in a more melodic, introspective fashion, as opposed to the Black Metal for which he is best known with FROSTMOON ECLIPSE, who themselves released their fifth full-length album “The End Stands Silent” on Osmose Productions in early 2011. More information about STROSZEK at http://www.myspace.com/songsofremorse