Finnish band FROSTTIDE have inked a record deal with NoiseArt Records as well as a booking deal with Rock The Nation/RTN Touring.

Commented the band:
“We are very happy to announce that we are now part of NoiseArt Records and Rock The Nation Booking Agency! We are thrilled to cooperate with them on future records and projects!”

Commented their label NoiseArt Records:
„We were stunned by the outstanding material the band has not only released themselves single-handedly, but has already been written for their debut album. They are young, very ambitious and the music is simply beautiful – melodic and dark yet intense and very heavy! We are very much looking forward to present this amazing band to all the fans out there!“

FROSTTIDE are a five-piece melodic/folk metal band formed by Joni Snoro back in 2009. They released their first EP called „Dawn of Frost“ in 2010 and won the „Year’s underground act 2011“ trophy at the Finnish Metal Expo. They have already played shows with KORPIKLAANI as well as festivals together with the likes of SABATON, FEAR FACTORY among other bands and released their second EP „Our Journey“ – again single-handedly – in 2012. 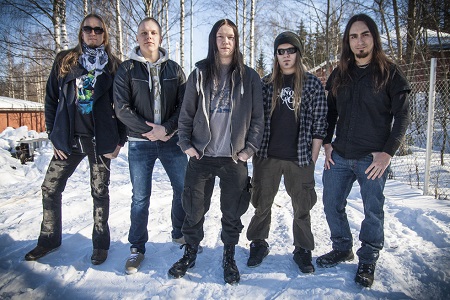 The band is currently working on their yet untitled debut album which is due August 30 this year. Right after they are gonna embark on an extended tour, more infos on that as well as the album title and artwork are coming soon.