Since their debut album „Spread The Fire“ made a huge impact on the metal scene, it was their second album “Plunging Into Darkness” that really made the difference and put FUELED BY FIRE on the thrash metal map for good. Now those insane thrashers are back with their newest effort called “Trapped in Perdition”.

„I would say the biggest difference to the previous album is the influence. We have more of an old school death metal influence along with late 80s early 90s thrash metal. A little heavier stuff on this one and lots of solos. Also some more technicality. I think it’s a step up from Plunging Into Darkness.“ Carlos Gutierrez, Drums

The album was recorded in the so-called Mana Recording Studios, Florida with death metal legend Erik Rutan of Hate Eternal. The front cover, which was done by artist Axel Hermann, who also did artworks for MORGOTH, ASPHYX, ICED EARTH and many others, also portraits the death metal influence with this dark, disturbing and gloomy piece of art.

End of 2012 the band embarked on a lengthy European run with the likes of KREATOR, MORBID ANGEL and NILE and they will do a South American tour as well as an extended North American tour this Summer along with Artillery, Gama Bomb and Bonded By Blood in August/September; a European tour for early 2014 is in the works.

The new FUELED BY FIRE album “Trapped In Perdition” will be out in Europe on July 26 and in North America on August 6 via NoiseArt Records. 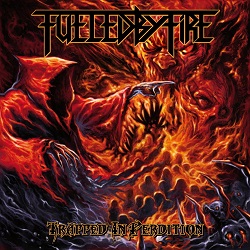