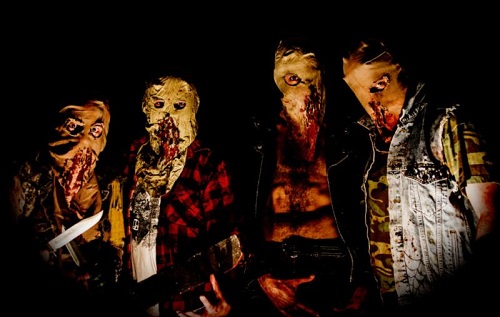 Surely an anomaly in GHOUL‘s catalog, the EP features songs written exclusively in their unique brand of surf metal the quartet has previously only dabbled in. Hang Ten picks up right whereTransmission Zero left off, relaying the tale of a Creepsylvania in tatters, and the terrible power struggle that ensues between two vicious motorcycle gangs. Noted Cambridge University musical anthropologist Dr. Mantle Bannister PhD had this to say about this odd assortment of tenebrous tunes: “Why, it’s quite remarkable. I’ve never heard the like. Is it surf? Not quite. Is it metal? Maybe. Is it jazz? No, that’s a stupid question, unfit for a real life noted musical anthropologist such as myself. It’s from Creepsylvania, you say? Ghastly country. Absolutely crawling with gypsies. Say, old chap, who let you in to my office?”

Hang Ten will be released on April 19, 2014 via Tankcrimes Records. Peep the artwork at THIS LOCATION.

In related news, GHOUL will headline the first night of this year’s edition of Brainsqueeze Fest. Set to take place April 18th and 19th at the Oakland Metro and April 20th at Eli’s Mile High Club, which will include BBQ and an Andrei Bouzikov art show, the mammoth event features more than a dozen acts including Municipal Waste, Final Conflict, Negative Approach. Fucked Up and Cannabis Corpse as well as a gaggle of new Tankcrimes releases to be revealed in the coming weeks! Get your riot gear ready. For more info, point your browser HERE.

Further GHOULish missives to be unearthed in the coming days. Until then, wither.