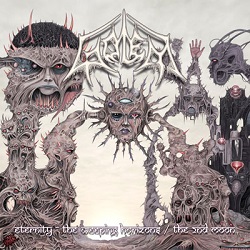 GOLEM. This legendary and absolutely underrated band started back in 1989. In the 1990s they have released two of the best Death Metal albums ever, which have never been released on vinyl. Until now!

Both albums were remastered by Andreas Hilbert (head of the band) and to top it of Mark Cooper has created new killer artwork. GOLEM are influenced by bands like CARCASS, DEATH or MORBID ANGEL and are surely on the same musical level. They never got the luck to be pushed by one of the big record labels at the time (early/mid 90s). They are still more or less active and the time has come to rise above and beyond, to show their great compositions to a wider audience.

Now it’s time to re-release both hard to find albums for the first time ever on vinyl (2LP), as well as Double CD and for Download!

Double-CD, Double-LP and Download will be unleashed from the grave on April 4th, 2014!