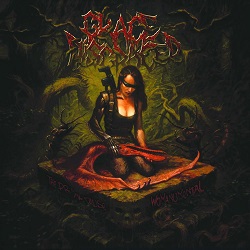 29 April 2014 is the official release date of a new album of Moscow female-fronted death metal band GRACE DISGRACED. The album is called “The Primal Cause: Womanumental“! The CD was released on a legendary Russian underground label MORE HATE PRODUCTIONS.

The artwork for the release was executed by a New Zealand artist Nick Keller! He created illustrations for each track, which will let you perceive the blades and the edges of this cold, enthralling concept for the band’s musical and poetical creation!

The album’s presentation will take place in Moscow club “Little Rock” on 7 June 2014.