Finnish black metal maniacs GRAVEBORNE stream the entirety of their forthcoming second album, Through the Window of the Night, at Terrorizer magazine’s website. Set for international release on January 20th, 2014 via Australian black metal stronghold SEANCE RECORDS, Through the Window of the Night displays GRAVEBORNE as a black metal Leviathan rising from the darkness to reduce divinity to ashes and unleash pure evil in the form of nine deadly psalms to Satan: ferocious and uncompromising black metal in pure ’90s style that will shake the heavenly spheres, joining destructive melody with unrelenting heaviness. Witness for yourself exclusively here, courtesy of the UK’s longest-running extreme metal magazine: http://www.terrorizer.com/news/streams/stream-gravebornes-new-album-window-night-full 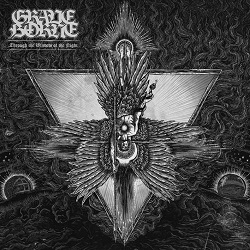 Tracklisting for GRAVEBORNE’s Through the Window of the Night

In 2008, the Finnish winter was thawed by hellish fire as two demons rose from the grave to form GRAVEBORNE. Marchosias and drummer Pentele first ignited the flame and recruited their legion – guitarist Brutalust, bassist Kalmo, and vocalist Raivo – to create intense black metal with the integrity, conviction, and aggression of the ’90s black metal scene. GRAVEBORNE unite the classic purity of traditional black metal with destructive melodies, unrelenting heaviness, and intense energy.