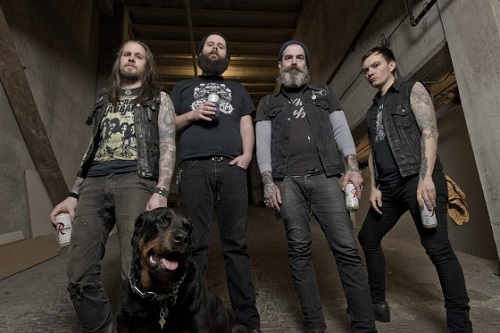 Portland doom miscreants, GRAVES AT SEA, will embark upon a European live incursion later this month with fellow riff worshippers, Sourvein. Set to initiate with what’s bound to be a cataclysmic performance at this year’s Roadburn Fest in Tilburg, the band will punish twenty-four locales with the trek coming to a ceremonious close at Heavy Days In Doomtown in Denmark.

GRAVES AT SEA will drop their This Place Is Poison twelve-inch EP upon the living this Spring via the menace merchants at Eolian Empire. Their first release since 2005’s scathing split with Asunder, This Place Is Poison was tracked by drummer Bryan Sours (ex-Subarachnoid Space) and Steve Lobdell at Audible Alchemy and mastered by Ryan Foster at Foster Mastering on their home turf. Side A’s “This Place Is Poison” finds the overwhelming, tar-thick sludge for which the band is so notorious smothering ear holes with a deluge of crust-ridden guitars anchored by swampy bass rumbles and planet-fracturing drums all submersed in the deadly howls and shrieks of the damned. On Side B, Black Sabbath’s “Orchid” and “Lord Of This World” get bold revisions: “Orchid” is eroded beyond its essence into a morose march towards death while “Lord of This World” gets a grim reconfiguration with grisly riffs, bilious hisses and a blackened atmosphere that takes the original to a dark, desolate realm of desperation and despair.

Gushes the Heavy Metal Tribune in a 5/5 rating, “The crushing riffs of [guitarist] Nick [Phit] right from the start of This Place Is Poison, along with that gloomy outlook that GRAVES AT SEA has, quickly reminds one of the dark arts of bands such as Electric Wizard… At the same time, the band includes some rather groovy moments… giving This Place Is Poison a stoner/doom feel, not unlike acts such as Dopethrone and Acid King, with that slight psychedelia that is invoked on the album.”

Doom or be doomed with a stream of “Orchid” and “Lord Of This World,” currently streaming at Cvlt Nation as part of their ongoing compilation series at THIS LOCATION.

Preorders will be limited to 300! Order your copy TODAY at THIS LOCATION.