„Goliath“ comes off GRAVEYARD‘s highly anticipated next album, „Lights Out“, due October 26, 2012 via Nuclear Blast.

The single will be released September 21, 2012 as digital download and on 7“ vinyl. The release will include a special non-album track, named „Leaving You“. 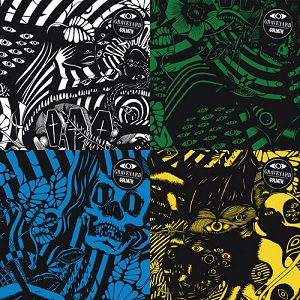 Commented the band: „The lyrics deal with the feeling that everyday life is a constant David vs. Goliath scene. You all know the story and the scene. You look around, get pissed off and want to “stick it to the man”. Musically it has many influences. And as usual we’ve tried to get it both heavy and swinging at the same time. So why don’t you just shake your record collecting old ass to the beat of the new tune from your favourite swedish numbskulls?“

After the stunning cover for „Hisingen Blues“ the entire community is eagerly awaiting the new album’s artwork. The band have now released another statement about it: „The cover is something completely different than the last cover. It has a lot to do with the title, „Lights Out“. Our goal was that both the title and the cover would sum up the feeling of the album. And just to make things clear Lights out is not a reference to either UFO or ENTOMBED. Even though both are excellent bands.“

A Graveyard kiadja a ‘The Apple And The Tree’ hivatalos videoklipjét!

Hot News: Graveyard “The Visitations of the Great Old Ones” Video